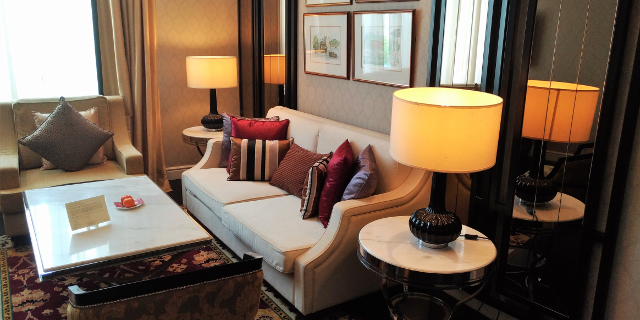 For one of KL’s many long weekends, it seemed like a good idea – as always – to get out of town. Honestly, with forthcoming trips at the time to Thailand, Langkawi, Ireland, the US and possibly the US again later in the year if I can squeeze it in (!), the budget went absolutely nowhere and a stay somewhere closer to home seemed to make more sense; and so it was, that I had a mini-staycation at The Majestic Hotel, right opposite my apartment here in Kuala Lumpur.

The Majestic Hotel is one of those ‘unique’ colonial-era upscale hotels that locals – and visitors alike – aspire to visit and stay in. So much so, that even I didn’t want to just take a normal grab car ride over there, and instead went for Grab Premium, even though the property is literally just around the corner.

Malaysia, unfortunately, does not do grandiose welcomes or over-the-top arrivals as well as say, Thailand and entering the very grand, open lobby that once again, became quite obvious. The reception desk is tucked a little to the back and there was no sense of urgency or speed to see us through the check-in formalities. Once done, there was an escort to the room, given that it was in The Majestic Wing, the hotels club ‘wing’ effectively.

The room, a suite, was immaculate. Inside was a large drawing room, with a large desk to one side, and plenty of space to sit and relax. Moving into the bedroom, it was absolutely spotless, fresh, clean and very tastefully done. The bathroom meanwhile followed very much a colonial style and was very well spaced out. Overall, I was very impressed with the dimensions, cleanliness and finish of the suite. Great start! 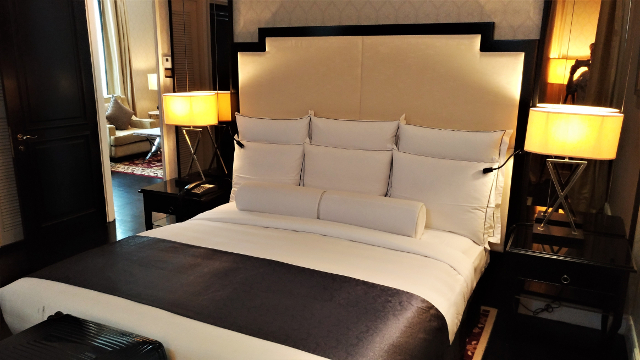 On the negatives – which have to be mentioned – the music from the stairwell outside could be heard clearly in the drawing room, and oddly, the bedroom windows seemed stare into another adjoining building. None of it the worst problems ever, but for the premium wing of an upscale hotel, something I found a little unfortunate.

There was an extremely odd moment during this period while walking to the main pool where we were taking pictures of the lounge off the main colonial café area (there was nobody inside whatsoever). One staff member became apprehensive and said they weren’t sure if pictures could be taken and went off and found someone else more senior who informed us very directly (bordering on rude) that a picture – even from outside the glass-windowed room – were not allowed, even with nobody there. What? Sorry but in all my time in far more sensitive places I have never encountered such total rubbish.

Moving along, there are two pools. The main one I found to be on a rooftop of the new wing of the property and while very lovely, it does sit right out in the sun and was quite busy. Further to that, unfortunately there is no bar or food service and so it is very much ‘just a pool’ The other pool – which I was told was mostly for patrons of the spa – was able to be used by guests of The Majestic Wing, and while on a much lower height level, was a far nicer and quieter pool. Towels had already been carefully laid out and while also sitting directly in the sun and facing the nearby road, I found this pool so much more pleasant and scenic. 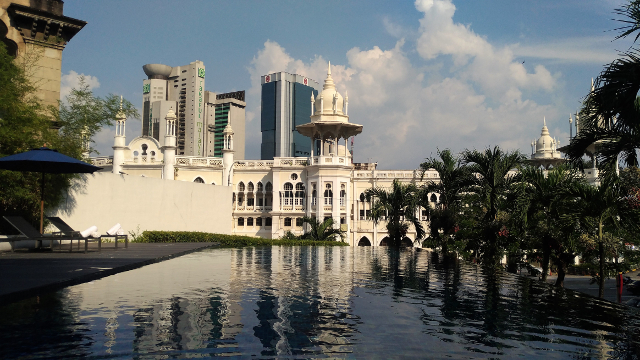 Meanwhile, while visiting The Majestic Club to ask about a late check-out, there was some confusion. The staff initially wanted my passport to begin check-in, then became very confused about how I already had a key – it seems as if checking in at the main desk (not that I was told not to, or escorted for private check-in at the club) had caused some major confusion and they didn’t yet realise I had already arrived and unpacked. Again, something I don’t think one should expect from such an upscale, aspirational hotel.

Speaking of which, the club lounge – as far as upscale hotel clubs go – is somewhat strange. The layout, similar to my room one floor above, faces out to the main road on one side, then follows a very narrow corridor opening up into a totally enclosed area where the self-service counter is located. The evening cocktails was very standard – there was no great sense of showmanship or occasion, and in all cases, it was far faster for me to get up and get my own drink (wine, in this case) rather than waiting, which seemed to take 15 minutes or more to product anything. Again, it was a lack of speed and attention to detail that I found quite unfortunate. 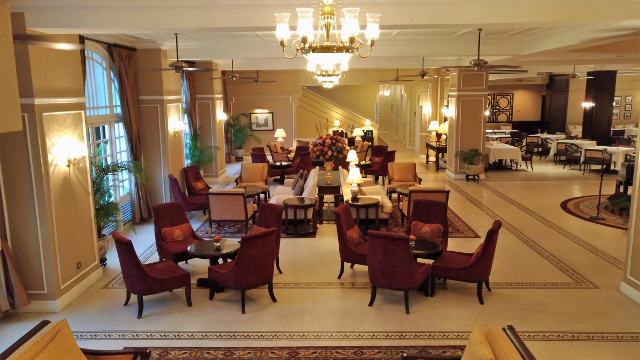 Dinner that evening at the old colonial café was exceptionally good however and the service very much more than made up for the tardiness with the drinks earlier in the evening. Breakfast the next morning however at Contango unfortunately saw another staff return to form; the first seats were right beside some kind of trash and smelled dreadful, while the next place was left completely unserved and I had to go rummaging around the restaurant for cutlery and placemats myself until someone (not the person who moved us) finally figured out what was going on and helped. Again, the food was very high standard for a breakfast buffet.

So what do I make of The Majestic Hotel overall? The ambience, the setting, and food overall were fantastic. The general standard of service however and little details (like the music from the corridor being fully audible in the room) let the property down quite a bit and took some shine off the whole experience. I feel like for an “old world” colonial stay again in future, I would consider and recommend it but in terms of service, standards and facilities, I would be more likely to recommend one of the other highly-rated city hotels.